Canberra, Australia's Capital and often called the Bush Capital, is the home of National Parks, forests and nature Parks- it is surrounded by these, making it the perfect place for nature-loving campervanners to stay a few days. 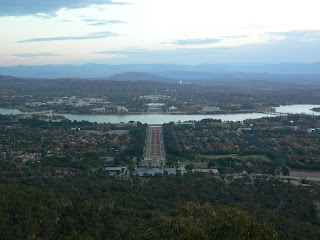 The Australian National Botanic Gardens are in Canberra, and there you can visit the collection of native plants from all over Australia. There is also the Canberra Nature Park, which is made up of 33 seperate areas so you will find nature wherever you go in the city! It is made up of grasslands, reserves, bushland and covers most of the hills in the city. Canberra was a planned city right from the beginning, and the Nature Park was an integral part of that- most of Canberra's residents live within walking distance of a Nature Park area.

Further afield you can see the Uriarra State Forest, or Stromlo Forest Park which is home to many sports such as horseriding, cross country running, mountain biking and hiking. There is also Kowen Pine Forest, and many more. Canberra is surrounded by native flora and fauna.

The Australian Capital territory (the area surrounding Canberra) has several basic government owned campsites which are inexpensive and will get you closer to nature than parking your van in a Holiday Park. These can be booked online here. Click here for campervan hire Australia.