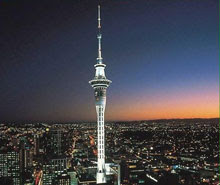 Auckland's crowning glory is the 328 metres (or 1,076 feet) tall Sky Tower. It's the tallest free-standing structure in the Southern Hemisphere, offering breathtaking views for up to 80 kilometres in every direction. And just to put that height into perspective, it's the same as standing 37 buses end to end.

Built between 1994-1997, the Sky Tower hosts telecommunications and broadcasting services as well as being a hotspot for tourists. A member of the World Federation of Great Towers, the Sky Tower has three observation decks, restaurants and even bungy jumping on offer. It's also part of the SkyCity casino complex.

Take a ride up the glass-fronted lifts to enter a world of fine dining at restaurants -- take your pick from Orbit Revolving Restaurant, The Observatory brasserie or just go for coffee at the highest altitude cafe in the Southern Hemisphere.

So if you're visiting Auckland, don't forget to take in the Sky Tower -- and remember, for a fantastic deal on Campervan Hire Auckland, check out the deals at http://aucklandcampervanhire.co.nz

Video: A quick look at the view from the top

And remember, for a great deal on Campervan Hire Auckland, check out the deals at http://aucklandcampervanhire.co.nz