So what is a Campervan?

Have you ever wondered what the difference between a campervan, motorhome and RV is? If you're interested, read on.

Campervans are just what they say they are - a van that is great to go camping in, because they are fitted out for travelling and sleeping. Are RVs and motorhomes any different? It depends where you come from.

In the US, you will seldom hear the term "campervan" used, but rather RV and motorhome are much more common. "RV" is short for recreational vehicle, and for Americans and Canadians, RVs and motorhomes are usually larger than campervans and are used for everything from short holidays to permanent living quarters - not to be confused with mobile homes which are typically a fixed abode in a trailer park. In North America, campervans are often associated with Volkswagon buses produced from 1949 - 1967.

For the British, a "campervan" or "camper van"is the most common term, followed by "motorhomes" or "motor home". But they can also be called Motorcaravans, Campers, Dormobiles or Caravanettes.

For Australians and New Zealanders, Recreational Vehicle is not a common term, and the terms "campervan", "camper" and "motorhome" are the most widely used. For most people, all terms refer to the same vehicle, but for some locals "Recreation Vehicle" can refer to a sport utility vehicle or a four wheel drive vehicle. Also, in Australia and NZ, smaller campers are sometimes referred to as 'Kombis' after the Volkswagen Kombi van of the 1950s (also know as "Microbus" or "hippie van").

In France and Quebec, the most commonly used descriptionis the Anglicized term "camping-car", while in Spain it is referred to as "autocaravana."

While in Germany, Austria and Switzerland, it is called a "wohnmobil", "wohnwagen", "reisemobil" and also "camper".

For South Africans and Namibians it is most often referred to as "camper" or a "truck camper". Other terms such as "RV', "motorhome" and "campervan" used by some, and generally understood – but less common.

If you are looking for genuine web discounts for your next overseas holiday, we offer great campervan rental deals on the leading providers in many countries: 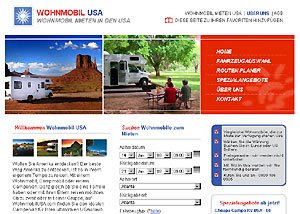 Rohan Marx, General Manager for iMall Brands, says "We are pleased to be able to offer German travellers to US a wider choice of vehicles, as well as special offers that aren't available on other German language sites. Our site also gives German travellers the advantage of booking in Euros or US dollars and avoid the extra expense that can come with currency fluctuations".

Mr Marx adds, "The United States is a very attractive destination for RV Rentals for European travellers - the falling dollar, diversity of cultures and changing landscapes, and also the variety rental options available make an US holiday very appealling to German, Austrian and Swiss travellers."

You can visit Wohnmobil USA via http://wohnmobilusa.com

Trends are looking good for RV Rental in the USA:
http://www.researchandmarkets.com/reports/c82480

Greater demand for rental services of recreational vehicles has been generated by an increase in propensity to holiday domestically. US residents are less likely to travel overseas for holidays in the near future, owing to the continued threat of terrorism and the aftermath of the invasion of Iraq. Increases in income are also leading to greater propensity to upgrade dwellings and therefore increasing the chances to rent trucks for moving. The increased income also leads to higher occurrence of recreational vehicle rental.

Looking for great USA RV Rental - look now further than Fetch RV Rental USA - find all types of motorhomes and recreational vehicles to rent from travel trailers, Class A, Class B, Class C to Kombi Rentals- Fetch has an RV for you!

With the ecomony down on the ropes, airlines and auto travel is suffering, however there is one bright spot in American domestic travel

Laing said his company had booked 6.5% more reservations in Southern California for this Thanksgiving holiday compared with last year.

Susie Lott, branch manager at Apollo Motorhome in Hawthorne, said the economy hadn't affected RV rentals as much as it had other industries.

"People think maybe going on an RV trip would be a luxury, but instead, people are saying, 'We're not going to give this up.' They'll go closer to home, but they'll still go for the experience."

Looking to save a bit of dinero on your next motorhome booking? Look no further than Cheap RV Rental!

Winnebago Industries, Inc. has reveald some new models of RVs at the 46th Annual National RV Trade Show in Louisville, KY. One of them includes the Hybrid Concept Adventurer:

Winnebago Industries also unveiled a full-size Class A hybrid concept RV with the new 2009 Winnebago Adventurer. The Adventurer hybrid concept vehicle features a Freightliner ecoFRED chassis with Eaton hybrid power system components. This is a full hybrid system in that it utilizes two independent power sources (a diesel engine and an electric motor) that work in conjunction to optimally power the vehicle. The Adventurer Hybrid also is the first hybrid motor home to feature an Auxiliary Power Generation (APG) unit that senses hybrid battery power levels and automatically engages the coach's engine to charge the batteries. Because this hybrid system also supplies power to the 120-volt coach system, and on-board generator is not required. The Adventurer Hybrid concept vehicle explores new horizons in RV efficiency and functionality and is just one more example of Winnebago Industries tradition of industry leading innovation.

"RV vacations are not only fun, affordable and comfortable for families," says Richard Coon, president of Recreation Vehicle Industry Association, "this study shows that they're also more green than vacations including flying."

So if you are looking to go Motorhoming consider companies that care about the enviroment. Once such company is EnviroCamper:

Got $3,950 to spare? Find out more about World Recreational Vehicles Market

For a 'mere' $3,950 - you can find out the state of the World Recreational Vehicle Market:

Sadly, it doesn't seem to have anything about RV Rental markets - but it could prove useful if you have the dosh spend! 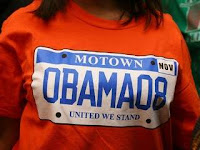 Recreational vehicle companies also are experiencing a boost in business. Within the last week, Westland-based Feister Auto & RV has received dozens of inquires and visits from people interested in renting a vehicle. Cruise America, which operates out of Feister, provides five- or seven-person rental RVs that will cost about $700 for the trip.

If you are still looking to go to the presidential inauguration, why not book cheap rv rental with your friends and family? Check these sites for some rv rental deals: