Here's a list of some of the best RV parks in California, sourced from www.totalescape.com.

The list on www.totalescape.com includes links to:
To book cheap RV rental in California online, go to cheaprvrentalcalifornia.com 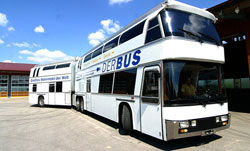 This articulated motorhome from Germany lays claim to being one of the world's largest. In fact it was in the 1997 edition of the Guinness Book of World Records as just that -- the largest motorhome in the world.

Called Der Bus, the motorhome has two decks with a bedroom, living room, kitchen, dining area, guest berth and bathroom all on the upper deck. The lower deck consists of the driver area, eight passenger seats, a conference area, reception, bar, garage and storage room. It's up for sale too, to see more images go to http://english.derbus.de

Plug time -- if you're looking for great deals on motorhome rental in Germany -- and let's face it, most of us don't need a motorhome this big! -- go to www.cheapmotorhomerental.de.

Thief Steals a Caravan with a bonus surprise

... the bonus being a sleeping owner! here's the story and the source

A thief made off with a caravan in Skövde in southern Sweden on Saturday night. To his surprise he later found that the caravan's owner was asleep inside at the time.

The hapless thief took his chance to make off with the caravan parked at Billingsluttningen in Skövde by connecting it to the back of his car, according to Sveriges Radio Skaraborg.

But little did he know that he was also taking the caravan's owner along for an impromptu nightime drive.

The thief discovered his unwelcome booty only after making his getaway, when he pulled over and attempted to force entry into the mobile home.

The caravan's owner, who had been abruptly woken from his slumber when his holiday abode had been fastened to the thief's car, then screamed at the would-be intruder.

The resultant shock was enough to persuade the thief to flee the scene, empty-handed.

Skövde police have been supplied with a full report of the incident and have classified the crime as attempted theft and endangerment.

If you are looking for steal on camper rental or rv rental then check out Cheap RV Rental's coupons!

Sprechen Sie Deutsch? - sorry I don't don't but iMall Brands has launched a couple of new German Language sites - check them out if your mother tongue is Deutsch!
Camper Neuseeland 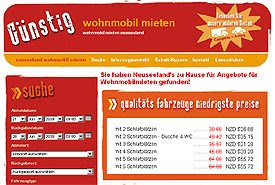 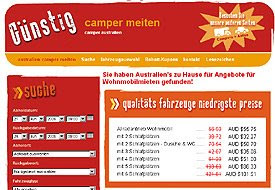 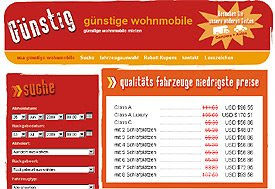 Here's an article from the Telegraph.co.uk about the state of Motorhoming in the UK

"The credit crunch has been brilliant for us," he said. "People can't afford to go abroad so they are looking for a cheaper alternative.
"It can cost about £3,000 to take a family of six to Spain for a holiday but they can rent a motorhome for less than a third of that including site fees and insurance.
"The weak pound means that we are also getting more people from continental Europe because their euros go a lot further in this country than in their own."
Mr Conneely said his customers were "all types - retired people, young couples and families", many of whom were trying motorhomes for the first time.
"They like the freedom that a motorhome gives to move around without spending a fortune," he said.

If you are looking to book a great campervan deal check some of these great sites:
Cheap Campervan Hire UK
Senior Motorhome Rental UK

Here's latest round of RV Rental News in the States, most of it looks good for the RV Rental in the USA.

is reporting a whopping 124% increase in bookings versus last year on their Florida RV rentals and predicts a record breaking summer season. Allstar also reports their and rentals are up dramatically as well since opening additional locations in those states.
read more here

Because of record high fuel prices, last year wasn't such a good year for RV rentals. But even though the economy went sour, many people are paying hundreds to even thousands of dollars to rent an RV this holiday weekend.
read more here:

Looking for a great deal on your American Road - why not try booking on Fetch RV Rental to find some great deals: