Looking to rent a campervan in Sydney Australia- check out some great Sydney motorhome hire deals! Now is a great time to visit Downunder - its not too hot and there are less tourists on the road.
If the city gets too hectic for you, take your campervan and visit the Blue Mountains, just a couple hours west of sydney - See video below:


Here are some caravan parks in the blue mountains you can stay at:

If you're looking for Tasmania campervan hire, check out the deals online at http://tasmaniacampervanhire.com.au.

The following information on Tasmania is from Wikipedia (http://en.wikipedia.org/wiki/Tasmania):

Tasmania is an Australian island and state of the same name. It is located 240 kilometres (150 mi) south of the eastern side of the continent, being separated from it by Bass Strait. The state of Tasmania includes the island of Tasmania, which is the 26th largest island in the world, and other surrounding islands. The state has an estimated population of 500,000 (as of December 2008) with almost half located in the greater Hobart area, and an area of 68,401 square kilometres (26,410 sq mi), of which the main island covers 62,409 square kilometres (24,096 sq mi).

Tasmania is promoted as the Natural State and the "Island of Inspiration" owing to its large and relatively unspoiled natural environment. Formally, almost 37% of Tasmania is in reserves, National Parks and World Heritage Sites.

The state capital and largest city is Hobart, which encompasses the local government areas of City of Hobart, City of Glenorchy, and City of Clarence, while the satellite town of Kingston (part of the Municipality of Kingborough) is generally included in the Greater Hobart area. Other major population centres include Launceston in the north and Devonport and Burnie in the northwest.

Video: A great video by a couple who went on a romantic four-day campervan holiday in Tasmania. Makes me want to head there right now! 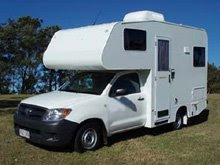 Below is a link to a story about campers who have been illegally staying on private property at Machans Beach, one of the Cairns Northern Beaches in tropical North Queensland. The headline in the article, at www.cairns.com.au, calls it "Battle Over Hippie Haven". If you're looking for Cairns campervan hire, check out the great deals at http://motorhomesincairns.com.au. But stick to legal campgrounds, or you'll wake up with an angry locals banging on your door!

The story goes that a block of private land at Machans Beach has been used by travellers -- "hippies", says the story -- as a campground. Local residents want them gone -- and rangers have spoken to them, but as it's private property the rangers have no jurisdiction. The story gained traction after a real estate agent started marketing the beachfront property, at AUD$1.5 million and discovered campers stayingthere. And when the agent told the owner about the dilemma, the owner laughed and said, "Why wouldn’t you want to camp there, it’s beautiful." Here's the story link.

Please check your rental contracts before you do this with a motorhome rental!

Watch as these daredevils attempt a death defying jump over a motorhome... will they make it?

If you want to jump in superb RV Rental Discounts, go to Fetch RV Rental Now!

From Top Gear. Yes, I know you'd love to do this:

Like these motorhomes, you gotta be fast to get some great RV Rental Deals (Fetch RV Rental)

Will it Make It - The RV over another RV Stunt

Will it make it over the other RV - watch and decide!


If you Rent an RV - be sure to take out some Drive Easy Insurance!

Here are some hot videos I pulled from YouTube 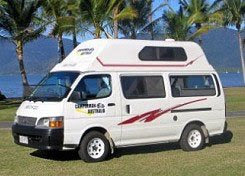 Thinking of touring Australia's Gold Coast or Sunshine Coast in a campervan? If you're looking for a cheap deal on campervan hire in Brisbane, check out the deals online at brisbanecampervanhire.com.au

Here's a great article from the Sunshine Coast online newspaper The Daily, about a group of 'Grey Nomads' who hire publicly owned places like school grounds to camp in:

Mike Kenavan said most of the group was retired with many planning longer trips "as the year goes on".

Some of the group members have been to, or are planning trips to, Glen Innis, Dysart, Nobby and Adelaide.

"We're extremely grateful for sites like this being made available, rather than going into commercial parks," he said.

Errol Thompson said while the sites were cheaper, it was a two-way street for the school.

"The school gets money from us hiring the school yard and they get unofficial caretakers acting as security for the site," he said.

Read the rest of the story here at The Sunshine Coast's The Daily.

Thinking of touring Western Australia in a campervan? If you're looking for a fantastic deal on campervan hire in Perth, check out the deals online at campervanhireperth.com.au.

Here's an excerpt from great article in the Sydney Morning Herald, about a campervan road trip from Melbourne to Perth:

They said we'd never make it. They said we'd break down in the middle of nowhere, run out of water and if the unforgiving climate didn't kill us, the guy out of Wolf Creek or another Bradley John Murdoch would. But that didn't stop us setting off in a 1977 Volkswagen campervan sans air-conditioning for a trek across the Nullarbor Plain in blistering heat.

Despite the voices of doom, we lived to tell the tale. Alas, the Kombi didn't.

But it did make the 4000 kilometres from Melbourne to Perth, via the southern West Australian coast - and halfway back - without incident, and what an amazing road trip that made...

Read the rest here, including information about Balladonia, WA, where in 1979 the remains of NASA's Skylab came tumbling down -- the town museum still has pieces of Skylab on display.

Video: Road trip, filmed from Perth, Western Australia down to a camping ground destination six hours away in Parry Beach.


For a great deal on campervan hire Perth, book online at http://campervanhireperth.com.au