There's still time to go for the RV option and enjoy the 2010 Winter Olympics in Vancouver, Canada. A recent article at the Examiner says that although most RV parks are booked out already, RVs will be allowed to park at Jericho and Spanish Banks beaches. If you're looking for a great deal on Canada RV Rental head to RVRentalSaleFinderCanada.com

The article offers lots of tips on visiting Vancouver during the Olympics and says this about RV parks:

Although most permanent RV parks surrounding Vancouver are sold out for the 2010 Winter Games, the newest accommodation announcement is that recreational vehicles (RVs) will be allowed to park at Jericho and Spanish Banks beaches during the 2010 Olympic Winter Games for just $95 CAD per night. RV-ers lucky enough to secure a spot will enjoy some of the best views of the city and mountains and great access to downtown.

Check out the deals on Canada RV Rental at RVRentalSaleFinderCanada.com

Make it a Family Affair with an RV Rental Vacation 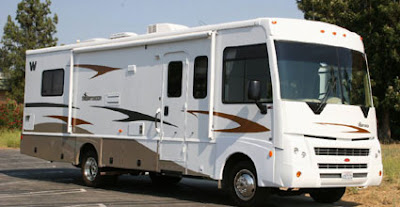 Here's a link to a great website called Lolo's Extreme Cross Country RV Trips, at www.cross-country-trips.com. The site is maintained by a family who have crossed the USA seven times in nine years, covering 66,800 miles in their motorhome. They have travelled through 49 states, 10 Canadian Provinces, visited 60 National Parks and 36 State Parks. They've hiked, rafted and gone fishing in some of the most beautiful places in North America.

If you're looking for a great deal on RV Rental go to RVRentalSaleFinder.com

It was a lifestyle choice for Herb & Lolo (aka Lorry), a couple that have known each other since third grade. In 1993 they discovered that Lorry had breast cancer and were forced to consider what was important to them:

"As a result, after 5 years from Lorry's diagnosis, we both left our professional corporate careers - bought a Lazy Daze motorhome - and set off to show our children the beauty of the nation's National Parks. We feel we have taken a "trip of a lifetime" every summer - and have done it with our offspring at an age where they can truly begin to appreciate it."

Check out this link to Herb & Lolo's photo albums -- they've created a fantastic resource for motorhome and RV enthusiasts. On the website they also have:
And their Top 10 Featured Destinations:

Video: It's a Family Affair -- Brad's family has seen 48 states over eight summers

Taking a Break from Driving 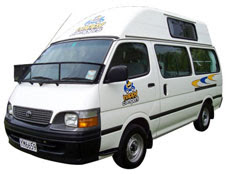 Driving can be quite tiring, especially around New Zealand's gorgeous countryside and its gorges, rivers, coasts and mountains. It's really important to stop for a break; once every hour is a good guideline.

And fortunately, some New Zealand towns have eye-catching bathroom facilities -- the Tirau toilets are featured in the below video. You can't miss them, so give yourself a pit-stop and stretch your legs. Maybe even take a 10-100. (That's CB talk, check here for more)

If you're looking for a great deal on New Zealand campervan hire go to http://campervanhiresalefinder.co.nz. The site has negotiated bargains with major campervan rental companies -- and we all know how it pays to check out the special offers.

While we're on the subject, the most notable toilets in New Zealand are the Hundertwasser block in Kawakawa, listed by the AA in their list of 101 Must-do Weekends. Designed by artist, ecologist and architect Friedensreich Hundertwasser, the toilets are made from the community's recycled glass bottles and bricks:

A brightly coloured archway greets visitors as they arrive at this quintessential Northland town. Sculptured columns beckon those with crossed legs to make their way quickly to find comfort and relief within its walls.

You'll have to put these facilities on your travel list of er, jobs to do...

Video: Tirau for a quick one


If you're looking for a great deal on New Zealand campervan hire go to http://campervanhiresalefinder.co.nz. 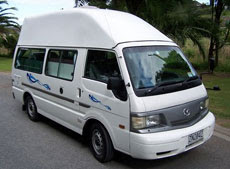 Zorbing, also known as Sphereing, is another attraction available to tourists in New Zealand.

If you're looking for a deal on New Zealand campervan hire go to http://campervanhiresalefinder.co.nz

Zorb Rotorua is the flagship site of the Zorb family and has been running for over 14 years. In fact, Zorb Rotorua is a Winner of the Visitors Choice Award for the things to do in New Zealand. Check them out at www.zorb.com/rotorua

Here's some background on the origins of Zorbing, from Wikipedia:

Sphereing (globe-riding, zorbing) is the recreation of rolling downhill in a sphere, generally made of transparent plastic. Sphereing is generally performed on a gentle slope, but can also be done on a level surface, as well as on water, permitting more rider control. In the absence of hills some operators have constructed inflatable, wooden or metal ramps. There are two types of spheres, harnessed and non-harnessed. The non-harness spheres have up to three riders, whereas the harness variety is constructed for one to two riders. Double-harness spheres have different slope requirments, and must only be operated in specific locations. The longer runs are approximately half a mile. The first sphereing site was established in Rotorua, New Zealand, by Andrew Akers and David Akers.

In 1994, Dwane van der Sluis and Andrew Akers conceived the idea for a type of sphere in Auckland, New Zealand, calling their invention the "Zorb". With two other investors they created the firm ZORB Limited, and set to work commercializing sphereing.

Don't forget to check out the deals on campervan hire New Zealand at http://campervanhiresalefinder.co.nz

Did you know there are 100 thermal hot pools around New Zealand? Around 35 of those are commercial and around 60 are all natural, non-commercial hot pools. For a complete list, go to http://www.nzhotpools.co.nz/hot-pools.

Thermal pools are one of New Zealand's great side-trips, so if you're campervanning around NZ, make sure you unwind at one. And if you're looking for a steaming hot deal on New Zealand Campervan hire go to http://campervanhiresalefinder.co.nz.

The video below features Wakite Valley Thermal Pools www.hotpools.co.nz, which is around 25 minutes south of Rotorua, off State Highway 5. The pools tap into the ‘Living Waters’ of Te Manaroa Spring, the largest single source of 100% pure boiling water in New Zealand.

There's a main splash pool (35-38C), an adjoining toddlers' beach area and a sit and soak pool (38-40C) as well as a tranquil garden pool. From the private spas, you can control the temperature of your own pool and take in native bush views.

There's also an Eco-Trail -- an educational walk taking you to Te Manaroa Spring. Along the way you will learn about ferns and mosses that are unique to a few select geothermal areas in the southern Rotorua area.

All this plus a cafe and, importantly, a 20 site campground with shower, laundry & kitchen facilities. And yes, there are powered sites available.

Video: Justin relaxes in a hot pool at Wakite Valley

Remember, for a great deal on campervan hire New Zealand go to http://campervanhiresalefinder.co.nz.

Check Out Coromandel by Campervan 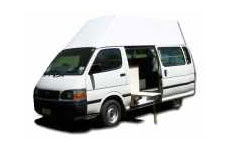 The Coromandel Peninsula really is a playground for waterbabies, with the Firth of Thames leading north to Coromandel Harbour and the Hauraki Gulf on the west coast -- and glorious beaches and bays facing the Pacific Ocean on the east coast. There's opportunity to do all sorts of outdoor activities like canoeing and kayaking, as well as fishing, diving, snorkelling or just taking it easy on the beach.

It's such a beautiful area to visit, and the water's getting warmer already. Book a Coromandel roadtrip -- check out the amazing offers on New Zealand campervan hire at http://campervanhiresalefinder.co.nz.

Here are some handy links for activities in the Coromandel:
And some visibility tips for kayakers, sourced from www.watersafe.org.nz:

Video: Dig your toes into that sand, Justin!

If you're looking for a great deal on New Zealand campervan hire go to http://campervanhiresalefinder.co.nz

Campervan Tips -- Getting Directions From the Locals

Touring the country in a campervan sure is easier than it used to be, especially in an age where GPS equipment is easily at hand. But sometimes a bit of local knowledge can go a long way. Tourist spots are one thing, but the advantage of hiring a campervan is that you don't have to stop at the same places as busloads of other tourists.

So if you're after specialist local information -- whether it's about good fishing spots, good surf beaches or idyllic, out of the way places to visit, ask a local. Try a hotel publican, a service station attendant. You'll find that most Kiwis are pretty friendly.

Kelly Tarlton's Underwater World is one of Auckland's favourite attractions. When the late Mr Kelly Tarlton, a world-renowned marine archeologist and diver, had the idea to build an aquarium in disused sewerage holding tanks under Auckland’s waterfront, to many it seemed like a hare-brained scheme. But the construction of the 110-metre acrylic tunnel used for the Underwater World was a feat of Kiwi ingenuity.

Here's some interesting information on the history of Kelly Tarlton's, sourced from http://www.kellytarltons.co.nz

Kelly Tarlton’s dream came to fruition in January 1985, when after 10 months of construction, Kelly Tarlton’s Underwater World opened. The underground project cost NZ$3 million. It was the first time a 110-metre long, waterproof, transparent acrylic tunnel had been built. Importing prefabricated tunnel sections was too expensive, so Kelly flew in enormous, flat sheets of acrylic from Germany. These were formed into the correct dimensions and then the one tonne sheets were oven heated and curved to the required tunnel shape. The sections were carefully lowered into the site in special order, through a hole in the footpath of Auckland’s waterfront. After the tunnels were sealed, everyone took a deep breath as they were tested to ensure they were watertight…and with a sigh of relief… they found no leaks! This was a world first; a transparent, underwater tunnel from which the public could be face to face with Sharks, Stingrays and other marine creatures.

Sharks, stingrays, penguins -- they're all at Kelly Tarlton's Antarctic Encounter and Underwater World. You can even book a 'snorkel safari' and get up close to more than 40 species of fish from New Zealand’s coastal waters – including Blue Mao Mao, Eagle Ray, Snapper, Trevelly, Pig Fish and the famous Moray Eel.

Video: Justin checks out the tunnel at Kelly Tarlton's in Auckland, NZ

If you're looking for a great deal on campervan hire New Zealand go to http://campervanhiresalefinder.co.nz . 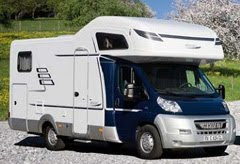 If you're looking for enviro friendly camper hire in Germany check out the deals at Enviro Wohnmobil go to envirowohnmobil.com. Enviro Wohnmobil provides motorhomes from one of the most innovative motorhome manufacturers in Europe -- award-winning vehicles with comfort, safety and style as you explore the beautiful German countryside.

Here's a great story about an ex-New York cop who wanted to see the USA from the comfort of an RV -- he also made some environmentally conscious decisions about the sort of vehicle to drive. After several events in his life made him question his own existence, he took to the road in a specially equipped motorhome:

Brian bought a large pickup truck and camper and equipped it with all the essentials...but these essentials would be powered by the sun and the wind. 6 large solar panels are on the RV, along with a retractable wind turbine..."the refrigerator , microwave, the vents, the fans, the lights, recharging all the camera batteries. Everything comes from the energy of the sun and the wind." Even rainwater is collected, filtered and used for drinking and bathing.

Check out the story here and watch the video clip below


Remember, for enviro-friendly camper hire Germany check out the deals at Enviro Wohnmobil go to http://envirowohnmobil.com.