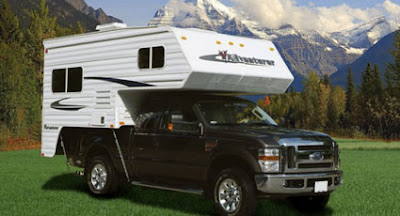 Canada is a fantastic place to visit and far has more to offer than simply watching bears in the wilderness. Compared to the USA, gas prices are generally very affordable through most provinces - often less than half what you'd pay in the USA. Which makes it a great destination to explore in a campervan or by motorhome.

For fantastic deals on RV Rental Canada make sure you check out RVRentalSaleFinderCanada.com

It's not all snow and ice either -- Canada has warm, sunny summer months from May to September, with temperatures above 20C. There are beautiful sandy beaches, like the east coast's Prince Edward Island and there are even beaches in downtown Vancouver.

The major cities play host to a great range of nightlife, with festivals and events happening all year round. Edmonton, Alberta has over 30 major festivals, including folk music, Indy Car racing and rodeos. Best places for nightlife, dining and bohemian culture are the cities of Toronto, Montreal and Vancouver.

Manitoba and Saskatchewan in particular are worth visiting in summer, when herds of Beluga whales gather in the Churchill River and the Hudson Bay; in early winter, it is simply the best place on Earth to watch polar bears. Tourism thrives in Drumheller,Alberta where there are deposits of fossils and dinosaur bones. And don't forget that in winter, you can check out the Northern Lights.

Remember to check out the deals on RV Rental Canada make sure you check out RVRentalSaleFinderCanada.com

The RV Centennial - 100 Years of RVing

2010 marks the 100 year anniversary of RVing in the USA and the Recreational Vehicle Industry Association (RVIA) is leading a year-long celebration, with events and promotions designed to highlight the history and future of RVing.

If you're looking for a great deal on RV Rental go to RVRentalSaleFinder.com. 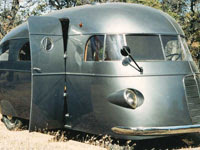 The RV Centennial (http://www.rvcentennial.org) celebrates 100 years of exploration and innovation. The concept of RVing captures the pioneering spirit of settlers who drove through North America in covered wagons, but 1910 is the year it really started. Mass produced campers and trailers were first built in 1910 and are the predecessors of today’s RVs.

RV sales are on the up. After tumbling to 165,000 during the recession, total shipments are expected to hit 216,000 in 2010. Industry experts say those numbers are a good sign for those considering renting an RV for a vacation. 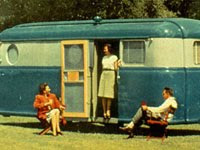 To celebrate the Centennial, RV historian and RVIA media spokesman David Woodworth has been touring the USA with two RVs -- a 2010 Fleetwood Discovery and a 1916 Model T complete with a sleeping/storage compartment known as a Telescope Apartment.

A huge party will be held by the RV/MH Hall of Fame and Museum in Elkhart, Ind. on June 7, during RVIA's 2010 Committee Week and Annual Meeting. For more - and downloadable RV Centennial logos and photos - check out http://www.rvcentennial.org.

And remember - for a great deal on RV Rental go to RVRentalSaleFinder.com.

If you're looking for a great deal on Launceston Campervan Hire go to http://launcestoncampervanhire.com.au

Tourists sometimes forget about Tasmania, the island state located to the south. Easy to access through budget airlines from Sydney or Melbourne or a quick ferry ride from Melbourne, it’s a gorgeous place with lush green forests, small, perfectly formed historic towns and crisp fresh air.

While the state capital is Hobart to the south east, second largest city Launceston is also a popular spot for freedom campers to depart from. One of Australia's oldest cities, it's located at the northern end of Tasmania, making it closer to the mainland and attracting many international tourists, close to half of which come from either the UK or the USA.

Tasmania is a great place to get away from it all. As well as sight-seeing, the bush and forest areas are host to commercially run flying foxes -- and in Launceston, there's plenty of entertainment. Take in an AFL (Aussie Rules) football game while you're there.

Darwin is a great place to visit for a holiday, although you do have to look out for the occasional stray crocodile. Last week a news story reported that a Darwin holiday park had to cancel their water aerobics lessons because a 1.5 metre fresh water croc was already doing laps in the pool.

If you're looking for a great deal on Darwin Campervan Hire go to darwincampervanhire.com.au.

Crocs may be abundant in the coastal Northern Territory but reports like this are few and far between. The water aerobics instructor has 20 years experience but said it was the first time a class had to be cancelled because of a crocodile in the pool. "I've had a few stars attending my classes, but I've never had a crocodile - I guess he's a star now in his own way," she said. (source: NTNews.com.au).

Video: Crikey, look at the size of this croc!

Don't forget to check out the great deals on Darwin Campervan Hire go to darwincampervanhire.com.au. 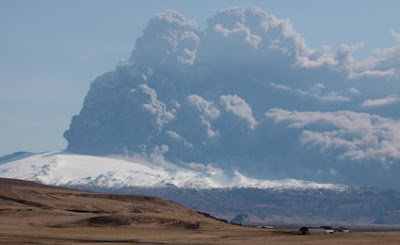 These spectacular photos are from the recent eruption in Iceland of the volcano that few outsiders can pronounce - Eyjafjallajökull. The Icelandic landscape is often barren but the country is also beautiful in so many locations. And this is evidence of nature at her most powerful. Image by Henrik Thorburn (sourced from Wikipedia.org)

Thousands of tourists are still stranded by the volcanic ash crisis in Europe. A week of airspace closures caused by ash cloud from Iceland's Eyjafjallajokull volcano has caused the worst breakdown in civil aviation in Europe since World War II, with around 100,000 flights cancelled. 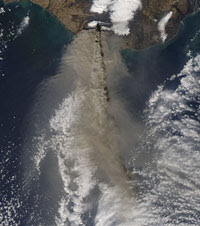 The volcano is said to be pumping between 150,000 and 300,000 tonnes of carbon dioxide a day into the atmosphere, but the crisis may still be reducing overall greenhouse gases by grounding planes, which emit CO2.

If you're planning a trip through Iceland check out the deals on Iceland Motorhome Rental atIcelandmotorhomerental.com

The photo above left is an aerial satellite photo from NASA. And to see some more fantastic photography from the volcano check out this great collection at www.boston.com. 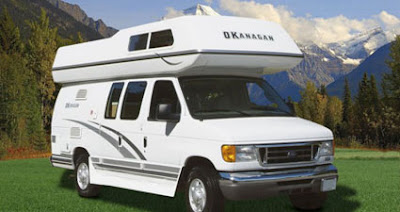 It's easy to see the picturesque Cabot Trail on Cape Breton Island by motorhome. Are you looking for a great deal on motorhome rental in Nova Scotia, Canada? Check out the range of comfortable motor homes available and get out on the Cabot Trail for the drive of a lifetime. For Halifax Motorhome Rental head to Halifax RV rental

The following information about the Cabot Trail is sourced from Wikipedia:

"The Cabot Trail is a highway and scenic roadway in the Canadian province of Nova Scotia, located in northern Victoria County and Inverness County on Cape Breton Island.

The route measures 298 km (185 mi) in length and completes a loop around the northern tip of the island, passing along and through the scenic Cape Breton Highlands. It is named after the explorer John Cabot who landed in Atlantic Canada in 1497, although most historians agree his landfall likely took place in Newfoundland and not Cape Breton Island. Construction of the initial route was completed in 1932.

The northern section of the Cabot Trail passes through Cape Breton Highlands National Park. The western and eastern sections follow the rugged coastline, providing spectacular views of the ocean. The southwestern section passes through the Margaree River valley before passing along Bras d'Or Lake.

Communities along the Cabot Trail include:
Remember, for a great deal on Halifax Motorhome Rental go to Halifax RV rental 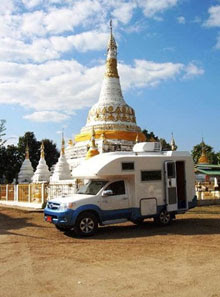 See the sights of Thailand in the comfort of a motorhome. For Thailand Motorhome Rental go to thailandmotorhomerental.com

Thailand is a newly industrialised nation with a healthy tourism sector, due to well-known tourist destinations such as Pattaya, Bangkok, Phuket and Chiang Mai.

Thailand is the only Southeast Asian nation that has never been colonised and as a result, its rich heritage has been preserved. With a long succession of very capable rulers in the 19th century, Thailand was able to play French Indochina and the British Empire off one another. As a result, the country remained a buffer state between parts of Southeast Asia that were colonized by the two powers, Great Britain and France. 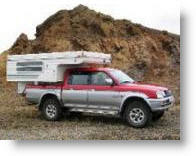 With pickup and drop-off points in Reykjavik and Keflavik international Airport, icelandmotorhomerental.com is the easy way to book Iceland Motorhome Rental.

Iceland has beautiful lakes, glaciers and fjords to see from the comfort of a motorhome, although be warned, the Highlands of Iceland are a cold and uninhabitable combination of sand and mountains.

The major towns include the capital of Reykjavík, along with its outlying towns of Kópavogur, Hafnarfjörður and Garðabær, Reykjanesbær, where the international airport is located, and Akureyri, in northern Iceland. Iceland has three national parks: Vatnajökull National Park, Snæfellsjökull National Park, and Þingvellir National Park. (Source: Wikipedia)

There are also many geysers in Iceland, including Geysir, from which the English word is derived, as well as the famous Strokkur, which erupts every 5–10 minutes. After a phase of inactivity, Geysir started erupting again after a series of earthquakes in 2000.

For Iceland Motorhome Rental go to icelandmotorhomerental.com And remember to play some local music on your journey from the likes of The Sugarcubes, Björk or Sigur Rós.

Video: A tour of Iceland's attractions, including the serene landscape and geo-thermal hot springs