The Australian Outback: Cross the Nullarbor Plain in a Campervan

In Latin the words for "no trees" are "null arbor," so it's no surprise that the expanse of road connecting Norseman in Western Australia to Ceduna in the south is called Nullarbor Plain. This stretch of road--namely the Eyre Highway that follows the southern edge of the continent connecting, the west to the more populated parts of the country--is paved and ideal for driving. The surrounding landscape, however, is barren and there is little to see as the road unfolds before you. There is nary a turn or bend, in fact, Eyre Highway features the longest straight stretch of road (196 km) in Australia. When departing from Norsemen there is a sign letting you know that Adelaide, the closest city to Perth, is only 1,986 kilometres away and the length of the drive ahead suddenly becomes clear. The long drive can be done in a car, but is much more comfortable to complete in a campervan hire.

The Love Generation had Woodstock and the 70s saw the birth of Glastonbury. Coachella, Lollapalooza and Lilith Fair all started in the 1990s. It seems that most people, regardless of what decade they were born in, love a good outdoor music festival. One of the best of the modern festivals is Ireland's Oxegen, which was founded in 2004. This year Oxegen is being held from July 9th to July 11th at Punchestown Racecourse in Naas, County Kildare, not far from Dublin.

I'd like to introduce to you Adnan, our Motorhome Man. Adnan is our expert Motorhome booking consultant who will help you and best deal for your Campervan vacation. Whether you looking get a Burning Man Motorhome Rental, get great One Way RV Rental Deals or save a bit of money on your Motorhome Holiday - call or email Adnan and he'll hook you up! Click below to get in touch with him! 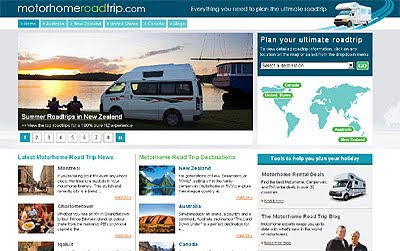 Thinking of taking a road trip in a motorhome, RV, or campervan? Start your journey at www.motorhomeroadtrip.com

Whether you're planning to drive over the red earth of Australia's outback, get up close to the amazing wildlife in a South African game reserve, or holiday in the awesome grandeur of Alaska, you'll find plenty of valuable information, advice and planning tools to make your trip memorable on motorhomeroadtrip.com

Learn about the 'must visit' locations and attractions in each country . Plan a self drive itinerary that makes the most of every one of your precious vacation days. Calculate your travel times and gas consumption, get expert advice from RV legends, watch RV travel videos, and even find the best motorhome hire and rv rental deals. It's all there on one website: www.motorhomeroadtrip.com

The site Apocalyptic Post has an interesting article on Post Apocalyptic Motorhomes along with some neat pictures. Us motorhomers feel like we can can survive any catastrophe as long as we have our trusty RV, Campervan or Motorhome prepared... so is your Motorhome prepared for the apocalypse? Click on the pics for the for info:
Fallout 3 Airstream goes to Charity 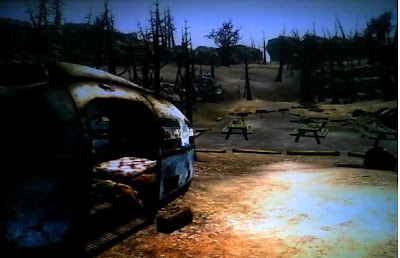 Abandoned Caravan in the UK via www.mechanised.org.uk 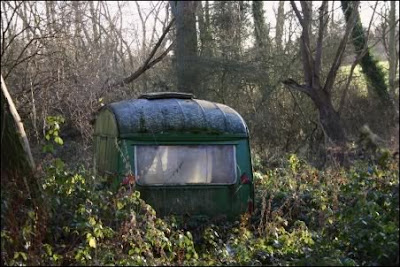 The Famous Airstream Ranch in Florida

And for those on a budget after the Apocalypse, the Shopping Cart Camper from Keven Eyr 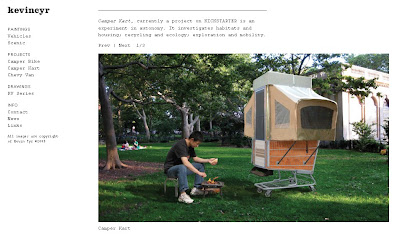 Also check out Jalopniks top 10 Post Apocalyptic Survival Vehicles and Flickr Search for Abandoned RVs.
Instead of waiting around for the Apocalypse to happen, why not book a fantastic RV? Check RV Rental Sale Finder for great Deals! 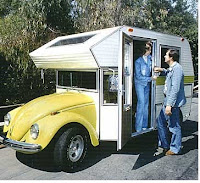 If you are tired the way the your old VW looks, why not convert it to a mini home? From rqriley website you can buy the blueprints to do just that!

Driving MiniHome is an addictive experience. Acceleration and cornering are much like the original VW. But one does have to negotiate a few trial turns in order to gain confidence in its roll stability. MiniHome is much more stable than it looks. After a few minutes behind the wheel, the pleasure of driving such a small vehicle, in comparison to other RVs, begins to take effect. MiniHome has the same nimble feel that Beetle owners have always enjoyed in their stock VWs. The only detriment is limited rear visibility, similar to that of many other RVs. Also, maximum speed is reduced about 10 mph, and fuel economy suffers slightly because of increased air resistance at highway speeds.

MiniHome is built like any other camper using 1 x 2 structural members covered with paneling on the inside and conventional corrugated skin on the outside. Click on the bottom image in the left margin to retrieve an exploded view rendering of MiniHome's construction. Construction costs should run about $1500, plus the cost of the VW.

If you don't have the DIY skills to build your own RV, why not book a great RV Rental through Cheap-RV-Rental.com?

Every year, thousands of responsible campers enjoy the outdoors in the USA. However there are always a few to bad apples that ruin everyone's good times. Here is one Park Rangers rant about some campers that are a few beers short of six pack! From the best of Craig's List:
For the entire rant please click here. If promise not to make into this Park Ranger's blacklist, why not find great RV Rental in the USA at RVRentalSaleFinder.com 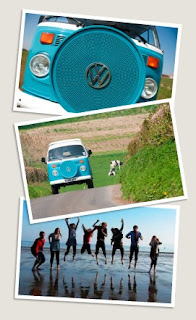 If you live in the UK and prospects of an Icelandic volcano are keeping you home this summer, check out Dorset Cereal's great VW Giveway. From there website:

Yes, we’re giving away our VW Campervan in a special free prize draw! But be quick, we’ll be picking the winner on 2nd June!

You might remember that last year we gave you the chance to win one with special packs of our mueslis. No one has managed to win it yet, so we’ve decided to give our own Campervan away in a free prize draw. One lucky winner will be driving this around over the summer!

It’s a wonderful Volkswagen T2 Danbury RIO with a sunroof, fridge and built in deluxe cooker with grill. All you need to do is fill in the quick form on the right and we’ll put your name in the hat to win it.

click here for more details on the VW Campervan Giveway and click here to read more about Dorset Cereals.

Of Course if you don't win (shameless plug coming) you can always check some great deals on campervan rental at CheapMotorhomes.co.uk

The remarkable image of a dangling campervan in Colorado is from a story  via DailyMail.co.uk.

With a 170ft drop below, Daniel Lyons could have done with knowing what Michael Caine's brainwave was at the end of The Italian Job which has a similar scene as its climax. Nonetheless the 34-year-old was saved by rescuers in Colorado in the U.S. after he had careered down the rock face in the Dodge camper van. Terrified, he'd desperately tried to balance the weight of the van to prevent him from plunging to his death. But in his confusion he climbed in the back - which was already hanging off the cliff - exaggerating the balance of the vehicle. As a result, rescue crews who raced to the scene of the accident found Daniel cowering in the swaying vehicle. They managed to manoeuvre him from the van and up the cliff face before he was airlifted to hospital where he was treated for minor injuries. 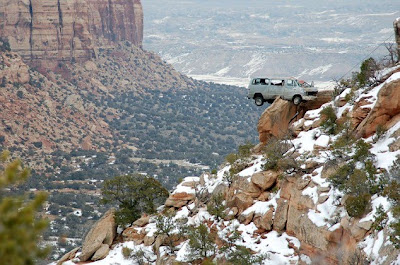 If you are looking for great Colorado RV Rental deals - check out Colorado-RVRental.com

Yes Virginia, there is a Flying Motorhome...

I've posted about various odd motorhomes in the past, but here is 'flying motorhome' - essentially a cabin built into a workable seaplane. What's next on the list or RV innovations ... the motorhome rocket ship? This Canadian company looks like its built the ultimate in flying/Rving Comfort. From OhGizmo (original source seems to be down):

It’s basically a two-seater single-engine aircraft that doubles as a miniature cottage. While it doesn’t have anywhere near the luxuries of a bus-sized motorhome, it does manage to include a bed, a dining table, a fridge, a stove, a toilet, a shower, a water pump, and a heater making it considerably more comfortable than your standard tent. And since the Private Explorer comes with the option of adding floats, instead of just visiting the lake, you can use it as your actual runway. Understandably the Private Explorer will set you back about $102,000 ($130,000 CDN) which is pretty much what a well-equipped motorhome would run you. Though I’m not sure which one would have the higher gas bill. 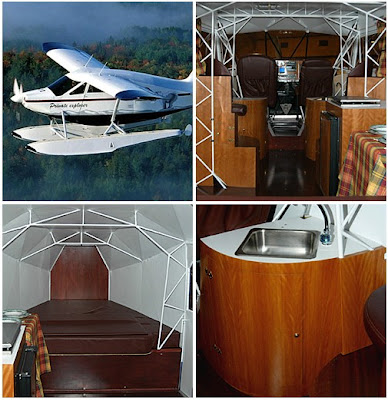 If you are looking for a more down to earth way of exploring Canada, check out RVRentalSaleFinderCanada.com for great deals on Canada RV Rental.