Head Off The Beaten Track in a Green Campervan Maybe calling Cornelius Comanns' new design a campervan is a bit of a stretch considering there is no real van involved in this innovative new design. Determined to create a greener type of RV the German industrial designer came up with this innovative concept, as seen on DesignBoom, that has been christened the Bufalino. The Bufalino is meant to meet the needs of one camper and includes all the comforts of home including chairs, storage and a bed, not to mention a kitchenette. While onsite laundry seems unlikely, the Bufalino does offer ample space to hang and dry your clothes once you've found a place to stop and enjoy. Based on a three-wheel, fuel efficient Piaggio APE 50, Comanns design is all about marrying environmental consciousness with flexibility and functionality. So if you're thinking of camping out solo why not keep your eyes open for a Bufalino to hit the road with? In the meantime head to Cheap RV Rentals to get a great rate for a motorhome rental near you.

Want to head out to Burning Man this year, but don't want to rough it? You're not alone according to The LA Times. While it was once mandatory for festival goers to brave the elements in order to participate that no longer seems to be the case. In fact, more than ever people are scrambling to secure luxury motorhome rentals to cushion the blow of camping outdoors in Nevada's Black Rock Desert, where the event is being held this year between August 30 and September 6. With the advent of activities like glamping (ie: luxury camping) is it any surprise that decked out RV rentals at Burning Man are now a reality? Sun and Sand in Port Elizabeth by Campervan On the South Eastern coast of South Africa you will find the country's second oldest city, the beautiful and historic Port Elizabeth. If you've travelled the Sunshine Coast or visited the Cape, Port Elizabeth is a wonderful last stop for your South African campervan vacation or a great to visit in and of itself.

Once known as the 10 minute city, with everything in easy reach, Port Elizabeth's urban sprawl has somewhat surpassed those earlier time estimates, although the city manages to maintain a cozy feel. Construction and development is on a rise, especially following preparations for the World Cup, but the city is still charming. Port Elizabeth is great because you can find sandy beaches only minutes away from a bustling metropolis full of laid back folks interested in introducing you to the good (or "lekker") life.

So head to Port Elizabeth to enjoy the year-round mild climate, the gorgeous beaches and important sights like Fort Frederick, the Shamwarmi Game Reserve and Elephant Park. Scuba dive, wind surf or enjoy a sunset cocktail while overlooking the ocean, you won't be short on activities or enjoyment while in PE. The city of Bloemfontein is known as the City of Roses and for good reason, the romantic blooms are everywhere here and there is also a rose festival held annually. Bloemfontein's Sesotho name is quite different, however, translating into City of Cheetahs. If you choose to tour Bloemfontein in your campervan rental you will find that the city offers a diverse selection of sights and activities to keep you entertained.

One of your first stops should be the Botanical Gardens, a no-brainer in a city known for its roses. Pause for a picnic, there are some great spots here and entrance is free. Head up to Naval Hill and the Franklin Nature Reserve to observe wildlife and take in some gorgeous panoramic views. When on Naval Hill keep your eye out for the White Horse, a landmark erected during the Angelo Boer War by the Wiltshire Remount Depot. For more nature you may want to visit the State President Swart Park (the King's Park here was opened in 1925 by the Prince of Wales) where a great art market is held on the first Saturday of every month. There is also a zoo that can be enjoyed by young and old alike.

For entertainment and a taste of life in Bloemfontein head down to the Loch Logan Waterfront where you will find numerous ways to kick back as well as stadiums for sports like rugby and cricket. For great architecture check out the local court buildings, very important to the lifeblood of the city, although if it is fun and entertainment you're looking for try the Windmill Casino and Entertainment Centre. Here you will find adults-only activities and fun for the whole family, everything from gambling to restaurants and shows to bowling.

Whether it is admiring lighthouses or whale watching along the western coast, sipping wine in the majestically beautiful Breedekloof Wine Valley, kayaking in Three Anchor Bay or riding an ostrich, Cape Town and its environs truly does offer something for everyone. Cape Town is the perfect mix of modern luxuries and natural beauty--if you're bored while touring this area in your motorhome rental then you're doing something wrong.

Drive west to find beautiful sandy beaches, gorgeous national parks and interesting caves to explore. If you drive the Cape Garden Route you can also walk amongst the tree canopies or surf. If awe-inducing natural beauty is what you're after you also won't want to miss Table Mountain and several of the mountain passes in the parks. Cape Town also offers several hot springs and spas to help you relax after a long day of beach combing or hiking.

If culture and gastronomy are what you're after don't fret, there is lots for you, too. On your way to your wine tasting why not stop for a spot of theatre in Darling and some delicious food in Moorreesburg? If you're a chocoholic then head straight to Tulbagh for your fix. Want some adventure in your food? If you drive the Cape Garden Route you will have the opportunity to try everything from ostrich eggs to crocodile steaks! To experience lively Cape Town culture try the Victoria and Alfred Waterfront (the area's most visited tourist attraction it boasts shopping, vitality and great food), bar hop on Long Street and enjoy a drink as the sun sets. On weekends head to Mzoli in Gugulethu where you can join in the local barbeque (braai) culture.

A South African City Full of Life and Culture: Visit Durban in Your Motorhome

The busiest port in the country, the habour of Durban also attracts many vacationing South Africans, in fact, it's the most popular domestic tourist destination in the country. It shouldn't come as a surprise that many South Africans flock to this coastal city, with it's mix of natural beauty and culture. In fact, there is a distinctly urban vibe in the city and if you park your campervan rental in Durban you will find a myriad of experiences just waiting to be discovered. Art, design, museums, food and music are everywhere in Durban, not to mention great architecture. There are some wonderful examples of Art Deco and Victorian architecture in the city that have been lovingly preserved (head to the Berea and the Victoria Embankment for some of the best examples).

In the summer months you will be able to enjoy Durban's sandy beaches and water activities, from swimming to a sunset cruise. Don't miss the chance to walk along the Umhlanga Rocks and keep your eyes peeled for dolphin sightings if you do! If you're interested in learning more about the area's traditional culture, why not take in Phezulu in the Valley of a Thousand Hills, which is a great glimpse into the ways the Zulus live. You can also drive your motorhome rental to top game reserves nearby or take a lazy, scenic country drive to get a break from the hustle and bustle of the city. In the winter head to the snowy mountains on the outskirts of the city or visit the Gateway Theatre of Shopping, which includes a wavepool, go-karts, a skate park and an indoor climbing wall that stands 23 metres high.

To get started on your Durban adventure and to find great Durban Campervan Hire Deals, visit CampervanHireSouthAfrica.co.za.

Explore Johannesburg in a Campervan 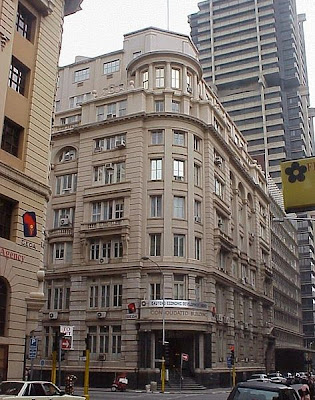 The world's eyes were turned on South Africa this summer with the buzz of the World Cup and the vuvuzelas, yet even though Spain has taken the trophy home it doesn't mean the party is over. If you have the chance, one place that certainly deserves a visit is Johannesburg, located in South Africa's wealthiest province, it is also the largest city in the country. This bustling metropolis is set on mineral rich (we're talking gold and diamonds) land and enjoys a generally sunny and dry climate punctuated by late day rainstorms in the summer months, which is from October to April in this part of the world. As public transportation is not always dependable a motorhome rental is a great way to explore Johannesburg to its fullest. Take a tour to the town of Soweto, the Nelson Mandela Bridge, or Gold Reef City, which is built around a mine and is a representation of what such a town would have looked like in the 1900s, complete with miner's houses. If you're looking for a little break from the urban sights then head to Sun City, two and a half hours outside of Johannesburg, this is a playground of resorts, casinos and safaris that will keep you more than occupied.

Getting Out of a Jam with a Campervan - Funny Camper Video

Driving a campervan means you have to be a little more careful on the road than you do when driving a regular sized car. You have to watch how you take your turns and especially try to avoid tight alleys. Unfortunately, the campervan owner in the clip below didn't follow these rules and when his camper gets stuck in a narrow laneway the driver does everything he can to rescue it, making quite a mess of things in the process.

House on Wheels: The Neverwas Haul

The Neverwas Haul is an imposing 3-storey Victorian House on wheels, which recently returned from a self-propelled trip around the world. The Neverwas is the brainchild of the Academy of Unnatural Sciences in Berkeley, California, a self-described "do-it-yourself group of tinkerers, gearheads, and steam bohemians who fabricate steam-powered art pieces out of repurposed industrial detritus." Inspired by the Victorian era and writers like H.G. Wells and Jules Verne (the Neverwas' Camera Obscura is a prime example of this) the group initially built the Neverwas Haul as a way to discover the Black Rock Desert, where they visited in 2006 and 2007 during the Burning Man Festival. 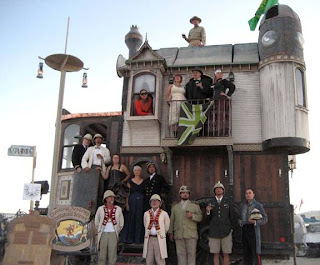 According to the Society's website, the Haul, which is built on the base of a 5th wheel travel trailer, is 24 feet high and 24 feet long with a width of about 12 feet and is built out of 75% recycled materials. The Hull's Camera Obscura is built on the structure's turret and provides the opportunity for a great view by projecting a series of lenses on a concave screen. 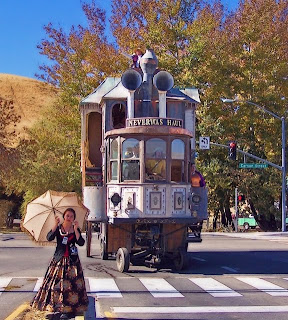 Photo courtesy of Neverwas Haul
Anyone wishing to be involved with the Neverwas Haul or other Academy endeavors can contact master carpenter and project lead Shannon O'Hare (shannon_o_hare@yahoo.com) for more information. The group most often meets at the Shipyard Labs on Sunday afternoons. The Haul is also often kept at the Shipyard and is rented out by the Academy for events like weddings.
Prefer a motorhome rental powered by something other than steam? Check out RV Rental Sales Finder for great deals on renting your ideal motorhome.

Enjoy a Slovenia Vacation in Your Motorhome Rental 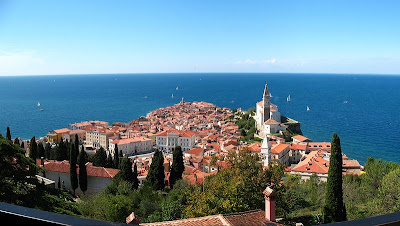