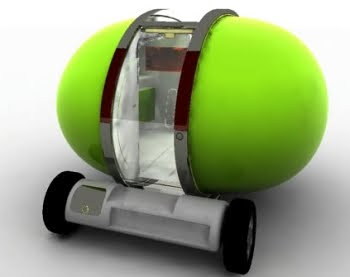 Imagine a compact, pod-shaped caravan that you can attach to the back of your car, so small that it fits into a regular parking space, but largely enough to sleep two. Now think of a unit with an innovative design tailor made with weekend getaways in mind. Got the picture? You're likely imagining David Tonkinson's Capsule Caravan, which has been designed with the young, urban iPod-loving generation in mind. One thing is clear, this concept caravan is definitely not your parents' RV. 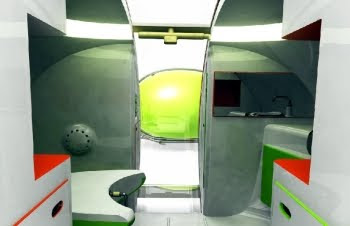 Small and lightweight the Capsule Caravan is perfect for a quick jaunt out of the city, made even easier because it can be towed by a small car. The parked pod expands and can house two people. Not only will the Capsule likely appeal to the fashionable and hip, but also to those who appreciate innovative design. 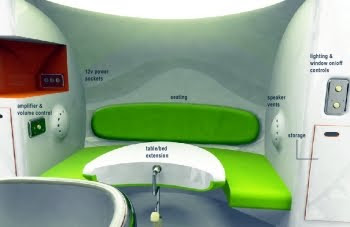 For instance, once the caravan is opened it splits in to two sperate Pods, one for "Comfort" and the other for "Service." The former is the sleeping and/or living area, while the latter houses storage and the power and water supply. Even cooler? The design uses electrochromatic film for its middle window, a material that allows the user to choose opaque or transparent settings, meaning you can decide whether you want to let in natural light or not. 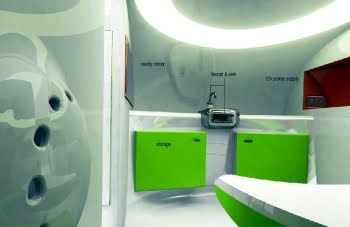 The revolutionary Capsule Caravan concept allows an entire population segment--namely space-conscious urbanites--a chance to get into the caravan market. By proposing a unit that city dwellers tight on space would be able to store more easily Tonkinson has created a design that aims to help many achieve their dreams of weekend getaways in their very own caravan.

Want to plan your own Motorhome Holiday? Visit MotorhomeRoadtrip.com to get started now! 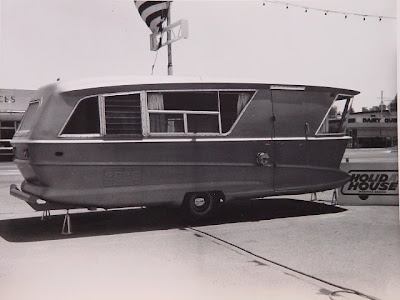 When Bardy Azadmard happened upon a run-down trailer on the side of the road, the design architect was immediately intrigued by its unique lines. This was 1999 in Valencia, just outside L.A., and Azadmard was able to bargain down the purchase price of the trailer to a couple of hundred dollars. Despite the fact that the trailer was in poor condition--it was so rat infested that all the electrical wires had been chewed through--Azadmard knew he had something special on his hands, especially as the unit came with all the original brochures and receipts. Following Azadmard's purchase the designer founded the website 1960Prototype.com, which follows his journey in restoring the trailer and learning of its unique history. 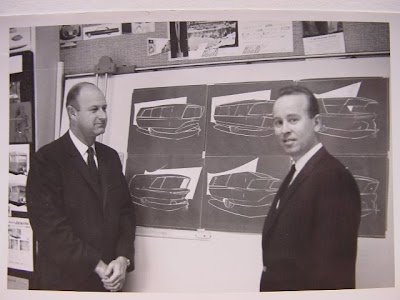 According to 1960Prototype, in 1959 David H. Holmes, an Air Force veteran and pilot, came across the drawings that designer Charles Pelly has made for a "dream trailer." Using Pelly's designs as a jumping off point Holmes imagines the first "Trailer for the Rich," which would include all the comforts of home on the road, and he patented his "Model X" idea. Lawrence McCane of Industrial Design Affiliates and Robert B. Brophy, an expert in fibreglass for missiles and satellites, began work on bringing Holmes' idea to life. At the time McCane noted that what they were working on was "ten years ahead of the trailer industry in concept, design and construction principles." 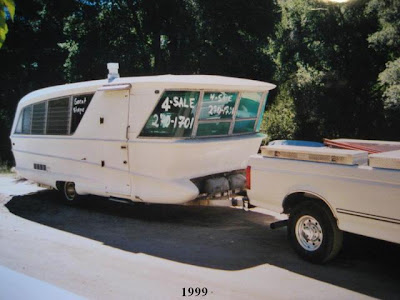 A year later the completed fibreglass prototype, known as the Geographic, was sent to a large trailer show in California. Being so advanced and luxurious also meant that the unit came with a hefty price tag ($8,495). The high price made the purchase of the Geographic cost prohibitive and eventually the model was sold to the manager of the showroom where it was being presented. After the manager's death the trailer, along with the brochures and receipts, was passed into the hands of her sister who would eventually sell it to Azadmard. 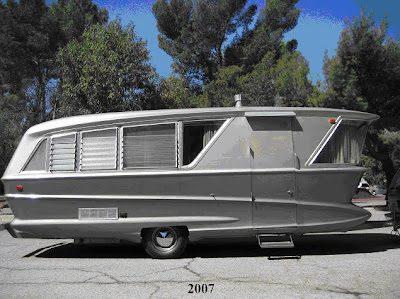 Azadmard writes that after purchasing the trailer he knew he had found "not just a unique, but also a One-of-a-Kind trailer." After further research the designer "decided to restore the trailer and save this piece of American History...All original appliances: Magic Chef stove and oven, Norcold refrigerator, air conditioner, heater, etc. are now in working condition. All original teak and walnut cabinets and wood are [also] restored to their original condition."
The careful restoration has indeed preserved a piece of not only American history but RV history as well. If you'd like to plan your own Motorhome Holiday visit MotorhomeRoadtip.com to get started!
All images courtesy of 1960Prototype.com

During a appearance on The Tonight Show with Jay Leno, actress Drew Barrymore spoke glowingly about her recent motorhome vacation experience. The actress, known for starring in movies from E.T. to Charlie's Angels, recounted an eventful RV trip she took with her two puppies and production partner Nancy Juvonen (who happens to be married to another late night host and comedian, Jimmy Fallon).
When Leno inquired if the actress had ever taken a trip across the United States she replied, "I've taken a trip across America in an RV and, honestly, I've travelled the world and I've experienced many things and this was one of the most fun, soul-fulfilling, entertaining, interesting experiences I've ever had."
The month-long trip was one filled with adventure, hijinks (including getting the RV stuck in a New Orleans gas station) and freedom. "We'd spin the bottle on the map and say 'Where are we going today?'" Barrymore recalled. "It was the most amazing experience. You usually don't have time in life for something like that, so it was such a gift."
Watch the full interview:

To begin planning your own soul-fulfilling Motorhome Holiday visit MotorhomeRoadTrip.com.

The Kindness of Strangers Leads to Motorhome Loot Being Returned 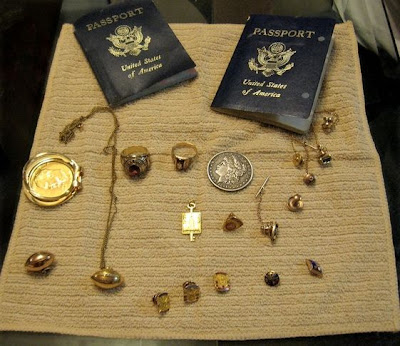 What would you do if you found a stash of mementos wedged into the hidden panels of your campervan? Turn Nancy Drew and track down the original owner would be the answer if you're David and Rhonda Graves of Smokey Point, Washington.

According to Everett, Washington's The Herald, the couple uncovered quite a few items--among them old passports and an Eisenhower silver dollar--in their RV, but didn't know who the original owner of the motorhome was and didn't have the resources to track him down themselves. It was at this point that the Graves' turned to a Herald journalist to help their cause.

When Quinton Eugene Cobb moved to Mexico a few years ago he left his motorhome behind. With no need for the large rig where he was going, and no time to sell it, Cobb left it for neighbors to use. It was at this point that David and Rhonda Graves came upon the abandoned motorhome, tested the engine and decided to take it home. They hoped it would be a vehicle they could take with them camping.

This was before the recession hit, after which carpenter David struggled to find work to support his wife and six children. To make some extra money David began taking apart the Jamboree RV to sell for parts and scrap metal. It was during the dismantling of the motorhome that the secret stash was discovered.

According to the Herald article the items found were "two slightly chewed, expired passports; a ring from the University of Oklahoma Engineers; a ring from a high school with QEC engraved inside; a money clip with a 1972 Eisenhower silver dollar; two football necklace charms from 1955 and 1957; five, 10 and 15 year pins from Fisher Service; a key to the city of Baton Rouge; engineering fraternity pins; two tie tacks and a 1891 silver dollar from the San Francisco Mint." Memories of someone else's life.

Instead of trying to sell the items the Graves' decided to track down the original owner of the motorhome so they could return his mementos. “The stuff doesn’t belong to me,” Graves told The Hearld. “This might be something his grandchildren might want.”

Through Facebook and eventually Cobbs' daughter, Julie Freeman, the items were returned to their rightful owner who now lives near Guadalajara in Mexico. The one-time football star is enjoying his new life in Mexico according to his daughter and will likely appreciate the extra mile that the Graves went to return his items.